We’ve had a hole in our kitchen ceiling for the last 18 months. Yes, you read that right–18 months. It drives me crazy every single day when I look at it, and somehow, my husband doesn’t even notice it. You tell me–is this something you could easily look past??

When our friends come over, they say, “Oh, you started a new project?” I love having to respond, “Nope. It’s been like that for over a year. We just haven’t gotten around to fixing it yet.”

How did we get this giant hole in our kitchen ceiling, you ask? Let me tell you a story.

We bought our house a month before and had been spending all our free time unpacking and fixing a few other immediate repairs we knew the house needed when we purchased it (replacing the hot water heater, installing a railing on our porch, and replacing the mortar on the back of our brick house that was causing leaking). My friend came and visited us for the weekend, and while showering she dropped a travel shampoo cap down the drain. She was mortified, but we assured her it wasn’t a big deal at all–we’d just use one of our ZipIts and pull it out.

Flash forward a week and we had no luck with the ZipIt, so we caved and called a plumber to snake the drain. It’d only be $150, they said, and take 30 minutes. No big deal, right?

Our plumbers, who I’ve used before and love, arrived on time. Five minutes after arriving, they walked down the stairs holding the tiny shampoo cap in their hands. They said they would just flush the drain to make sure they were no other issues, and then they’d be on their way.

Not two minutes after they started flushing the tube drain, I noticed water dripping slowly from the kitchen ceiling. I yelled up to the guys to Stop! They came down, stared up at the ceiling for a few minutes, speaking in hushed voices, and then came and told me they would have to cut a hole in the ceiling to see what was leaking.

Needless to say, I was livid. These plumbers come in to do a simple task, and they cause my pipes to leak and now have to cut a hole in my kitchen ceiling! After several exasperated minutes and being reassured that the hole would only by 18 inches (small enough to patch on our own), I gave the go ahead to cut the hole.

So now I’m sitting on the couch, watching their every move as they cut the hole, then with a flashlight, stare into the ceiling. They find a small spot where the pipe is leaking and explain they can fix it today, but it’ll cost an extra $300. After I begrudgingly agree (because what else do you do when faced with a rusty pipe that’s dripping water on your kitchen floor) they say they’re going to take one last look to make sure there’s no other issues before they start.

As they stare and stare with their flashlights pointed upwards, run up and down the stairs to flush more water through, they don’t seem happy with what they see. After five more minutes of whispering, they break the even better news than needing to have a pipe replaced–they need to cut a bigger hole because the pipes draining the upstairs bathroom were leaking in several places. Seems they had finally rusted through after being in use for over 60 years. Insert the 3.5×5 foot hole currently residing in my ceiling.

As luck would have it, they did not have enough equipment (or time) to repair all the pipes that day. So, my husband took a half day at work a week later, and $2000 later, we had sparkling new drain pipes in our bathroom.

Now, as cranky as I was at the surprise home expense, I could justify the expense because, hey, it’s plumbing–you don’t mess with that. But at the time, we couldn’t justify the expense of fixing the drywall when we had so many other fun new home expenses to contend with. (We assumed it would be $750-$1000). So, we decided to place it on our ‘To Do’ list, with a goal of completing within a year.

As happens with most ‘To Do’ list items, it got pushed off and pushed off. I got engaged, planned a wedding, had a broken washing machine to replace, had surprise surgery, got married, got diagnosed with POTS, and had more surprise surgery. BOOM, it’s 18 months later and we haven’t touched it.

Steve and I started fighting over it, as we both agreed it wasn’t something we felt comfortable doing on our own, but disagreed on the necessity of completing it. Steve said he could live with the hole forever–he never noticed it. I felt my eye twitching every time I looked at the kitchen because I had come to forget what our kitchen looked like with a ceiling.

As luck would have it, we had another drain pipe start leaking about a month ago that needed to be replaced. Our lovely plumbers came back out and did an amazing job as always. While writing the check to pay for the new work, one of the plumbers asked if we were looking for someone to fix the kitchen ceiling. He said he could do it on the weekend, and he would charge us $300. I don’t think Steve or I could have said YES fast enough. It took another 3 weeks to find a date that worked for both of us, but, now look! We have a ceiling! And, right in the middle of our kitchen renovation!

Lesson learned: when you can’t do something yourself (and aren’t ready to learn), pay for the professional to do it. And, PLEASE don’t wait a year and a half like I did. It’ll save you so much mental stress and marital bickering to just pay the $300 to have it fixed 🙂

Husband editorial note: To all the spouses out there, if your significant other says something bothers them, EVEN IF IT DOESN’T BOTHER YOU, make it a priority. I cannot believe the amount of stress I caused by being so cavalier and how EASY it was to fix in the end! ~Steve

I'd love your feedback or to answer any questions! Cancel reply

Get Our Weekly Updates Straight to Your Inbox! 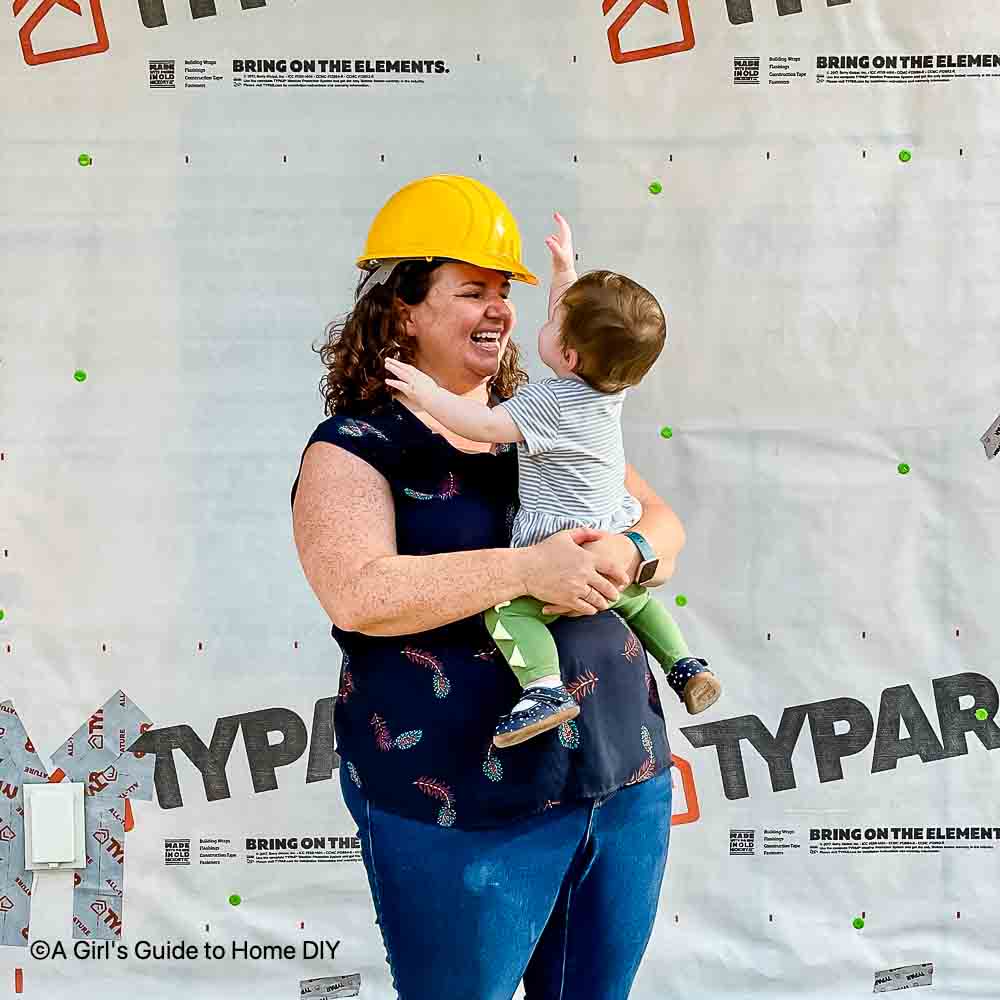 Hi there! I’m Lauren. After struggling to find one place I could find info on all types of DIY projects for my 1950s fixer upper (other than searching Pinterest for different sites for each project, or calling my dad), I decided to start A Girl’s Guide to Home DIY. Here we provide you with step-by-step tutorials on all home projects, from things as small as changing a door knob to things as big as renovating your entire kitchen. You’ll also now find information on navigating the new construction process and becoming a rockstar landlord. When I’m not blogging, I’m chasing after my little girl and (not so) little dog and finding new ways to make our home our own.

This website uses cookies to improve your experience while you navigate through the website. Out of these, the cookies that are categorized as necessary are stored on your browser as they are essential for the working of basic functionalities of the website. We also use third-party cookies that help us analyze and understand how you use this website. These cookies will be stored in your browser only with your consent. You also have the option to opt-out of these cookies. But opting out of some of these cookies may affect your browsing experience.
Necessary Always Enabled

Any cookies that may not be particularly necessary for the website to function and is used specifically to collect user personal data via analytics, ads, other embedded contents are termed as non-necessary cookies. It is mandatory to procure user consent prior to running these cookies on your website.